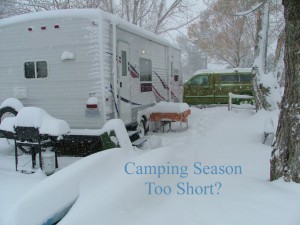 Seasonal campers are all familiar with the frustration of having to pack up for another winter. For many of us the Labour Day weekend signifies the beginning of the end; that time when we have to come to grips with the fact that our endless summer is about to end. In desperation, we crank up the humming generator, trying to keep warm through the night into the cold shortened days of October. Soon we admit defeat and long for the promise of spring, with its chilly mornings and northern winds, when our need for fresh air and the open road can once again be satisfied. Those of us familiar with camping in early spring/late fall know the importance of a well performing propane system and the frustration it can cause when temporarily taken out of operation. Seasons will affect the performance of your Propane system and while you desperately try not to take notice of them changing, outside ambient temperatures will vastly affect the performance of your cooking, heating and even the temperature of water you bathe in. Luckily, Fairview has designed a new X-Series of Gas-Flo regulators that perform noticeably better in cold weather conditions, at high altitudes and when tanks are low in Liquid Propane. Gas-Flo X-Series LP-Gas regulators were originally engineered with the goal of being used by Food Truck Vendors with high BTU/h demand 365 days a year. The two most important parts of your RV gas system are the Regulator and QCC1 Acme nut. A rubber pigtail and QCC1’s btu/h rating should be slightly higher than that of the Regulator itself, in order to maximize your regulator’s working capacity. Under normal temperatures this should work fine, but as temperature’s drop outside, so does the pressure inside your tanks which will also lower the shut-off capacity of a standard QCC1 nut (nearly 50% or lower). If your appliance rating is lower than the reduced QCC1 capacity, a safety device within the QCC1 nut will close and shut-off the flow of gas. Not fun! Gas-Flo X-Series Changeovers and Two-Stage Regulators are equipped with a proprietary internal device designed to safely allow for the use of higher BTU/h inlet capacities to assure gas appliances always get the full flow of LP-Gas they require without risk of unwanted gas system shut-downs, especially in colder temperatures. In case of an actual gas system rupture downstream, Gas-Flo X-Series Two-Stage and Changeover Regulators will immediately shut down, giving peace of mind and allowing for greatly improved performance in cold weather and other low pressure conditions. The bottom line is that Fairview’s new Gas-Flo X-Series RV Automatic Changeovers and two stage LP-Gas regulators can greatly improve the flow of LP-Gas to RV appliances year round. So if, like me, you’re the type of camper that wants to start earlier each year and carry on late into the fall (or just never stop camping all year long), the Gas-Flo X-Series is your new best defense against the elements that conspire to stop us.   By Andrew Ridge, Product Manager at Fairview Fittings & Manufacturing, Avid Camper and Outdoor Enthusiast Fairview Fittings & Manufacturing